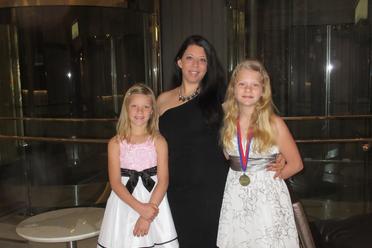 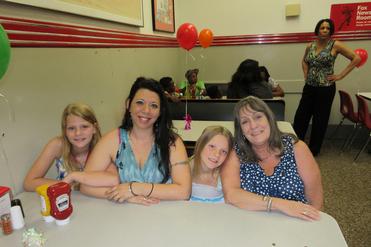 At the same luncheon, Site Coordinator Roberta Graham was presented with Community in Schools of Georgia's annual Site Coordinator Award. Here is a guest column Roberta wrote for the CIS-GA Newsletter:

​If you had told me five years ago that I would be working with children, I would have laughed at you. I decided at the age of 51 to go back to school for accounting. I signed up for the work study program and was asked to go to Metter.  I graduated and continued to work at Metter Intermediate School and loved it. Communities In Schools was rebuilding with a new Executive Director.  She approached Ms. Gwenda Rotton, principal of MIS, to refer someone for the site coordinator in the school. I was her suggestion.

I was Site Coordinator for one year, but we lost the grant which provided my salary.  I changed jobs and was not happy. When I had the opportunity to return to CIS I jumped at the chance. The 9 months I was gone I realized Communities In Schools was the best job I had ever had. I missed the kids and the staff. I missed the hugs, smiles, running around, and never doing what I had planned for the day. I felt very strongly that God wanted me back in Metter and with CIS. I was glad to be home.

When I returned, I went to New Site Coordinator training. I enjoyed it and learned a lot. It gave me ideas on how to get students to tell me what was really going on. For example, I had a student that was sent to me claiming Ms. Gwenda, our principal, always blamed him for things that happen. I just let him talk for a while, and then I asked if he could think of any reason why she would think he was to blame. Eventually, he began to tell me the things he had done and got caught doing. I explained he had given her reason to think that and he needed to show her that he was really a good kid. So far, he has not gotten into any more trouble.Being a Site Coordinator is one of the high lights of my life. It is where I want to be and where God has placed me.

In January each year, Communities In Schools celebrates Student Achievement Month (SAM).  Students are invited to participate in a contest where they share how Communities in Schools of Candler County has made a difference in their lives.  The students compete at the local, regional, and then state levels for a chance to win up to $1,000 in prizes.  Categories for the competition are written expression, creative expression, public speaking and computer technology.

This year Communities In Schools has two winners in the SAM contest. Madison Goodwin, 3rd grade, interviewed and wrote an article about CIS Candler Site Coordinator Roberta Graham. Fifth grader, Mackenzie Goodwin created a presentation using Prezi to illustrate her experiences with CIS Candler.  They won $10 McDonald’s gift certificates at the local level. At the Regional Level Madison won a $25 Walmart Certificate and Mackenzie advanced to the State level which she won for her category.

Both girls and their mother, Jennifer,  traveled with Site Coordinator Roberta Graham to Atlanta, GA to attend the SAM luncheon where all SAM winners were presented with their prizes.  Mackenzie's prizes included a Kindle Fire and an HP Laptop.